Doctors said Westerners had replaced one bad habit with another

They said spiraling rates of obesity meant that cancer – once seen as a disease of old age – was now increasingly being diagnosed up to two decades earlier than in the past. Their figures suggest one in five cancer deaths in Britain is caused by excess weight.

Speaking at the American Society of Clinical Oncology (ASCO) annual conference in Chicago, experts said “staggering” rates of obesity were responsible for the growth of 10 common cancers. Dr Clifford Hudis, a New York breast cancer specialist, said the trends meant that young people were increasingly presenting with diseases usually seen in old age. “Being lean doesn’t mean you won’t get these diseases, necessarily, but being obese might mean you get them earlier in life,” said the former ASCO president.

“So you might get colon cancer at 60 instead of 80.” The figures suggest that around 32,000 UK deaths from cancer a year are related to excess weight.

Jennifer Ligibel, a cancer specialist from Harvard University, said: “We have seen rising prevalence of obesity over a relatively short time – in a matter of decades its gone from relatively uncommon to around one in three adults being obese in the US – and the UK is not far behind.” Twenty five per cent of Britons are now obese, compared with three per cent in the Seventies.

Dr Ligibel said that, while smoking remained more dangerous on an individual level than excess weight, the prevalence of obesity meant it was fast becoming the key lifestyle driver of cancer.

“We are at a critical point now; we cannot afford to ignore this anymore,” she said, warning that on current trends, obesity would overtake smoking as the key cause of cancer in about 10 years.

She said the links between excess weight and cancer were clear.

“It’s the case with breast cancer, a prostate cancer, cancer of the colon and all the gynaecological cancers,” she said. She highlighted research showing that obesity increased the risk of womb cancer sixfold.

Experts said obesity was driving cancer because it results in hormones imbalances that can fuel tumour growth. Separately, experts yesterday said exercise was such a “potent” force against cancer that it should be prescribed as part of disease treatment. Researchers said women with breast cancer could reduce mortality by up to 50 per cent with half an hour’s moderate exercise, five times a week, compared with those who are inactive. The results were based on a study of mice by New York’s Memorial Sloan Kettering Cancer Center. Studies in men with prostate cancer also suggested vigorous exercise was linked to reduction of between 40 and 50 per cent in mortality. 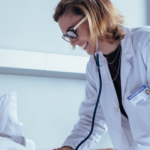