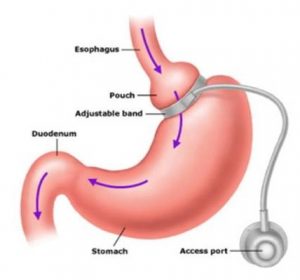 What is a gastric lap band?

The laparoscopic adjustable gastric band (LAGB) is often referred to as a lap band or ‘gastric banding’. It’s a silicone ring placed around the top part of the stomach. It restricts the speed at which food enters the main part of your stomach, helping you feel satisfied after a small meal.

The band can be adjusted over the months and years by injecting fluid, to keep you losing weight for around one or two years. It also makes it a good option if you’re a woman hoping to have a baby in the future.

In Australia, about one in five initial operations for obesity are a lap band.*

How effective is a gastric lap band?

If done correctly, a lap band gives weight loss that’s only slightly smaller than with larger operations, but with reduced risks.

Weight loss is individual, but on average, people will lose 50-60% of their excess weight after two years.

Laparoscopic techniques (that is, using a camera and only small incisions in the tummy) have made bariatric surgery less invasive than it once was.

Lap band is now the safest of the three weight loss operations routinely performed in Australia.

The risk to life in the month after this operation is between one in 1000 and one in 3000. The immediate risks include infection, blood clots and bleeding.

Even so, a lap band is still considered major surgery. Your doctor will talk to you more about the safety of the lap band and help you balance it against the risks of staying at your current weight.

A lap band is intended to be permanent, but it can be removed surgically if patients are getting too many negative effects.

These are relatively common. Removing a lap band is the most common revision procedure performed by bariatric surgeons in Australia.* Reasons include food intolerances (particularly white bread, chicken and some fruit and veg), erosion (where the band rubs against another organ), band slippage, reflux, nausea or vomiting, and weight regain.

A gastric band only works while it’s in place. Removing the band will invariably cause you to regain weight.AIHW data:

If you are considering obesity surgery the first step is to contact us for a complimentary consultation.

In this initial conversation we will discuss the SIOS weight-loss journey, including:

This is a private and confidential discussion during which we will also consider your medical history, suitability for surgery and life style. Take the first step towards a healthier life and fill in the online form or call us on 02 8080 4644